The Pegasus II descent phase begins at 100,000 feet with the Delivery System Release (DSR). This is the point where Mission Control remotely separates the balloon from the craft. The craft will begin its descent phase using only a 2 foot drogue parachute to keep the craft vertical to help maintain communications. The speeds will reach over 300 mph in rarified air, and begin slowing as the craft plummets to lower altitude where the air is becomes denser. Pegasus II will be traveling far too fast to land safely on this 2 foot drogue and requires its main 7 foot parachute to be deployed to slow the craft. Main Parachute Deployment (MPD) is the highest stress moment for the flight, where only 67 seconds remain before the onboard fail safes kick in (hopefully) and try to force an MPD event 54 seconds prior to landing.

The Pegasus Mission is all about experimentation and we have to put our craft, thousands of man hours, and our money at great risk to run some of these experiments. MPD is the single most nerve wracking, nail biting event on the entire mission. MPD is controlled by a processor running in the cloud that continuously estimates where the craft will be vertically 90 seconds into the future based on the current telemetry from the craft. A form of distributed intelligence. Once the processor determines that 5 consecutive forecasted values are at or below the MPD altitude (which is actually air pressure), then the processor calculates the time in seconds to when the craft hits the MPD altitude. A timer is started and the processor sends the MPD command when the timer elapses. The field gateways should receive the signal from the cloud-based processor and send the MPD command to the craft. MPD should occur at 12,000 – 11,800 feet. 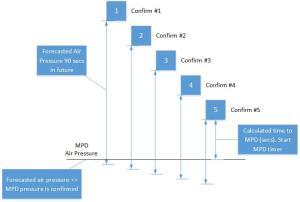 The big bet is low latency. If the processor does not receive the telemetry at a fast enough rate, then the calculations will be off, i.e., the craft will not be where the processor thinks it is…too low. If the MPD command is not quickly sent and received the craft will be at a lower altitude than targeted, which reduces or eliminates the safety margin. We not just testing a special system for MPD, rather we are testing the entire system. MPD uses exactly the same infrastructure and software that sends the telemetry to thousands of users that view the flight. So, we are experimenting with a huge number of messages flying around in both directions (from and to) at the same time and at scale. Risky? If it wasn’t, then we would not learn anything.