It has been a remarkable year for The Pegasus Mission as we flew to new heights in the upper atmosphere and traversed a desert at extreme speed. We engaged over 20,000 in a global audience in 60 countries with captivating adventures centered in STEM and experimental real-time technologies running in the MS Cloud. Our team grew to 60 volunteers and partners that showed unwavering support and demonstrated the power of the human spirit to challenge assumptions about is possible. The payoff was massive real-time engagement with a global audience and acceptance by the media for our collective efforts. Over 25 million people viewed 30 plus articles written about our adventures in near space and in the remote Alvord desert.

We made history with Pegasus II by flying 2 hours into near space and bi-directionally communicating with a global audience in real-time. Using apps for Web, mobile, and Media Services, thousands of people experienced the flight from 60 different countries as we transmitted video, telemetry, and received messages from well-wishers through our experimental technology running in the MS Cloud.

The impact was overwhelming and it deeply connected with a global audience of interested parties. Our charter of challenging assumptions about what is possible and making research an experience became a viral meme in 2016 as soon as Pegasus II lifted itself into the heavens. 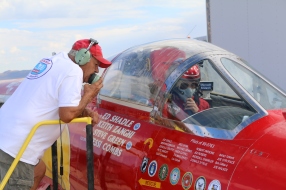 Our partnership with the North American Eagle (NAE) team built on our experience with Pegasus II and enabled us to synthesize technology to enable users to experience extreme speed in different type of hostile environment, a desert devoid of infrastructure. Using satellite communications and our experimental technology in the MS Cloud, we gave 15,000 people a real-time experience of the drama of extreme speed, i.e., 478 mph, across a remote desert floor. The outpouring of the emotional user messages we received told the same story as Pegasus II…it had deeply connected.

It is with endearing gratitude that we thank the NAE team, Ed Shadle, and Jessi Combs for allowing us to participate in a remarkable risky pursuit of a challenge that only a few will ever take, extreme speed.

The Pegasus Mission derives itself from a trifecta of concepts; research, experimentation, and human consumable experiences that form a powerful gestalt when combined with taking risks to achieve what has not been done before.   Our accomplishments in 2016 demonstrated that these challenges resonate broadly across a spectrum of interest levels. Technically, we showed how it was possible to build an open-system of heterogeneous system actors on a global basis that could behave organically and communicate in real-time with the latency of an online video game, and did this will great scale and economic feasibility. We simplified communications and decoupled the system actors, which allowed us to build unique experiences that touched people from impossibly remote and hostile environments. We took the initial steps in democratizing IoT and we were rewarded with the endless appreciation from the audiences for taking them on risky scientific adventures where success is never a guarantee. Together with our partners and our dedicated team of volunteers we brought a piece of an amazing future into the present.

2017 is shaping up to be an incredible year. Our top priority is the total eclipse of the sun occurring over North America on Aug. 21. This is a one-in-a-lifetime event. We will be creating a remarkable global event with “Flight into Totality”, where we will fly to 80-100K feet into the upper atmosphere and film the total eclipse from a floating and self-stabilizing platform.  We will provide Web and Mobile apps for a global audience to participate in the flights. To remediate as much risk as possible we will be launching redundant flights for 4 different time zones. This will be fulltime work to engineer, test, promote, and prepare for an opportunity that will not reoccur. We will expand on the number of ways users can participate and leverage more technologies. This is complex mission and time is short to begin the work. We plan to build video documentaries and promote them as we prepare for flight to amplify messaging, grow the audience, expand our connections, and capture mind-share. Using the videos and attaching to social media, we plan to build an audience that will become participants as we attempt to deliver another risky and perhaps astonishing mission to near space.  This is considered an “at-risk” project due to requirements of time and funding that we must pursue.

We plan to re-engage with North American Eagle for another run at history. One of the lessons learned from NAE was how well it connects with people, but how little has been done to message the enormity of the challenge or the engineering required to safely travel at extreme speed.   We believe that we can build a story around the challenge versus the land speed record, and maximize real-time engagement of a global audience. Our impact will be to deliver the extreme speed experience in real-time as the NAE makes it runs, and increase the ways we creativity engage with the audience.

In summary, we will be engaging more people for these events in real-time, telling true stories that capture the imagination, and putting leading edge technologies to the ultimate test. By doing what has not been done before, we energize, collaborate, partner, and go forth to challenge assumptions about what is possible.